Beta Alpha in the News

What Have You Been Up To?

Beta Alpha in the News 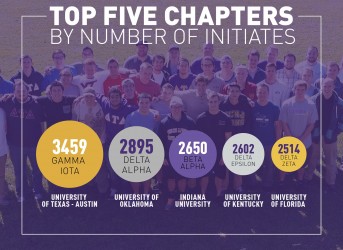 Here’s a fun fact for you, Beta Alpha Chapter of Delta Tau Delta made it into the top five chapters by number of initiates among active chapters and was recently recognized for it on the National Chapter’s Facebook page . 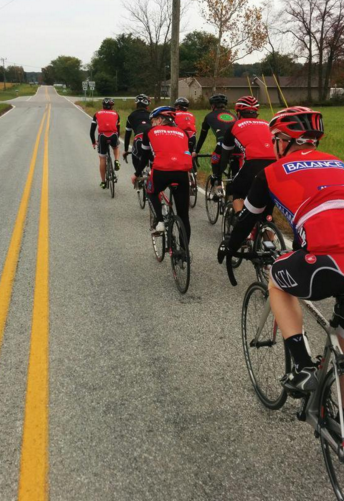 This spring, the goal for the Little 500 is the same as always—to win! Below are important dates for this season:

o Our qualification time is 4:55 p.m. We posted the fastest practice qualifications time in the field this week in 2:22.

You can check out the team’s website here (http://deltscycling.com/) and click here (http://iusf.indiana.edu/little500/fans/) to buy race tickets.

Follow us on Twitter (@DeltCycling) or reach out to Luke at lutormoe@indiana.edu or Anthony at avicino@indiana.edu if you have any questions.

Thank you for your continued support. Let’s ride!
Back to Top

Construction is well underway on the 15,000 square foot addition to the shelter! The project is scheduled to be completed this July with the undergrads moving in for fall semester. The coming months will be very exciting as the finishing touches come together and the project nears a close. Check out our Beta Alpha Facebook page for more pictures and details on the project. Feel free to contact Chad Casey at 317-250-5795 if you’re in town and would like a tour. 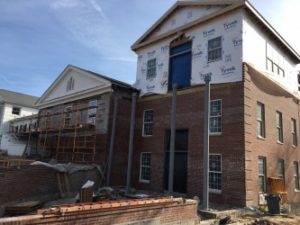 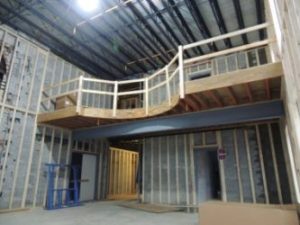 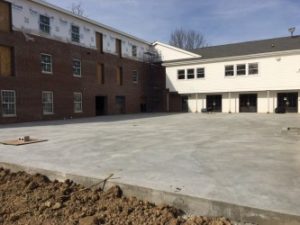 What Have You Been Up To?

We recently asked each of you to share what you have been up to along with any exciting news you might have. Several of our brothers reached out with a wide range of news. Here’s what they had to say: 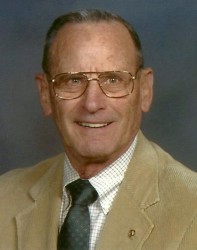 Don Brodie ’58
“I Retired from the U.S. Marine Corps in 1978. Retired from Lockheed Martin in 2014. Presently completing 18+ years serving with the Fairfax County Police Department as an Auxiliary Officer.” 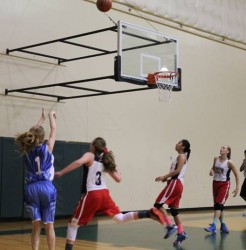 Dennis Sizemore ’67
“After coaching my granddaughter, Delanie’s basketball teams the past three years, we have been following her 7th grade Tualatin, Oregon team this winter through a successful championship season. She has an Indiana shooting touch!” 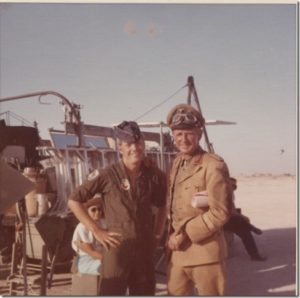 Lon King ’70
“Back in the day (1975 to be exact) conducting flight tests in El Centro, CA while my buddies, Lloyd Bridges and Doug McClure, who were hung over in picture, were making a WWII movie about a German tank chasing a British plane that had a hole in its wing across the North African desert— it was called Death Race. Just ran across the photos!” 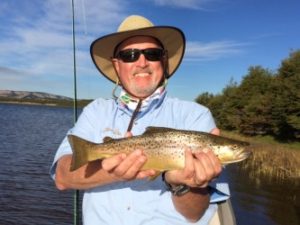 Scott Rogers ’71
“I recently retired after 41 years in the energy business, specializing in oil and gas exploration geophysics. My most recent positions with Noble Energy included foreign assignments, living and managing programs in England, China and Nicaragua. I now live in the Denver, Co. area with my wife, Carol, and nearby our five children and nine grandchildren. We now spend much of our time with family and traveling internationally, having just returned from a fly fishing trip to the Chilean highlands of Patagonia.”

Thomas Baas ’73
“TR and Butch: Been to Nick’s, now the game. Go Hooooosiers!”

Why I joined: I had made some good friends among a group that had already pledged. They invited me to a rush event, I liked the upperclassmen I met, received a bid and accepted.

Favorite memories: For me, the importance was the camaraderie and growing up with a group of guys I liked. New experiences were key. When I was a kid, our family didn’t travel much. I was with a Delt the first time I saw salt water, New York City, Yellowstone and the Rocky Mountains, a professional football game (Bears vs. Packers at Soldier Field, no less) and IU win a national championship. In 1976 Dave McRoberts ’76 and I drove from St. Petersburg, Fla. to Bloomington to Philadelphia – 30 hours straight in a car – at the end of Spring Break to watch the Hoosiers thump UCLA and Michigan for our third NCAA title. We were a group that was up for just about anything.

How being a Delt prepared me for now: Living in a fraternity house with 60-70 other guys teaches one a lot about group behavior and self-government. The necessity of compromise and the futility of inflexibility are good lessons for any mayor.

My advice to future members: Do good. Have fun. Get an education, not just grades. Grades are important, but what’s more important is that you learn, especially about how to communicate effectively. And, enjoy yourself. Universities are cultural smorgasbords. Try one of everything.

Joshua Harber ’96
“My family and I will be relocating this July to the country of PaPua, New Guinea, which is an underdeveloped island nation in the Pacific. We will be doing humanitarian and Christian mission work and will be making an initial commitment of two years, but it could turn into much longer. My wife will teach high school chemistry in a remote mountain school and I will be doing consulting work with a number of organizations, helping them to raise funds.” 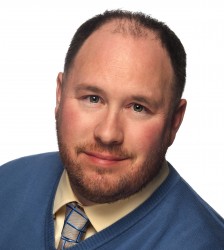 Chad Pollitt ’99
In addition to being the VP of Audience for the enterprise-serving digital marketing agency, Relevance, Chad Pollitt is now an Adjunct Professor of digital marketing at the IUPUI Kelley School of Business. He’s also just accepted an online instructor role for the Executive Education program at Rutgers University. 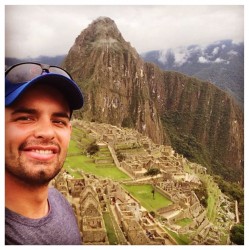 Joe Calhoun ’14
“Moved to Philadelphia for work in May 2015 as an account manager for ArcelorMittal. Traveled to Machu Picchu in November ’15 with my dad.” 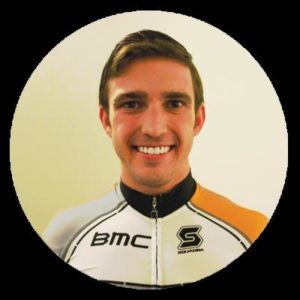 Luke Momper ’15
“Following graduation, I enrolled in a Master’s of Science in Physiology through the Indiana University School of Medicine. Concurrently, I recently signed a professional cycling contract with the premier of a new franchised track cycling league that is starting up in the United States this coming March. Following four strong years of riding intercollegiately for Indiana University as an undergraduate, and four years of racing in the Indiana University Little 500 (with a win in 2012), this has posed as the next big step in my cycling career and I’m glad to have made a leap from amateur to elite athlete status. There’s no telling where the next year of competition will take me. Here is a link to my bio page and the league’s website.”
Back to Top 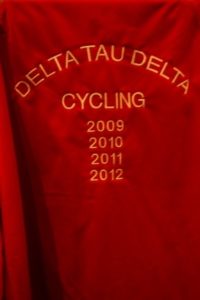 Our Delt Cycling team is preparing for their upcoming training season and their push to return the Little 500 championship to Beta Alpha. The race weekend has been scheduled for April 15-17, with the Little 5 taking place on Saturday, April 16. Need a reason to return? We have 5 reasons why you should start making your plans TODAY to come back to Bloomington for the biggest event of the year!

Since the 1951 beginning of the Little 500, our Delt Cycling team has delivered eight Top-5 finishes, including a first-place finish in 2012 and four others in the past five years:

Come back and cheer on our undergraduate cycling team to another championship! CLICK HERE to follow their progress over the coming months.

What could make the “World’s Greatest College Weekend” any better? How about a documentary that follows four teams — Cutters, Delta Gamma, Delta Tau Delta and Teter — through their preparations for the men’s and women’s Little 500 races in 2013 and 2014. Four 2012 IU alumni worked for two years to produce the film, “One Day in April,” which premiered at the Cinequest Film Festival on February 28, 2015. The film premiered in Bloomington on April 24, 2015. CLICK HERE to learn more about the film.

The Little 500 began in 1951 as a way to raise money for scholarships given to IU students who were working their way through college. To date, the IU Student Foundation has been able to give more than $1 million to students with the proceeds generated through the Little 500’s various events.

For several years, we have created a Beta Alpha Alumni Reunion Weekend around the Little 500 event. Next year’s event will be a great time for classes ending in 1 and 6 (example: 2011 or 2006) to return for significant reunion years! As always, all alumni, family members and guests will be welcome. Watch for details next spring! (But make your hotel reservation today!)

5. We Are Making Leaders!

We have all read new articles in the past year that reveal the at-risk nature of the Greek community today. The chapters that are succeeding, and making leaders, are those whose alumni have chosen to remain actively involved in the development of their undergraduate brothers. We are one of those chapters. So, let’s keep the trend going! Come back, be involved and pay forward what older generations of alumni did for you!

Watch for more information about the Little 500 in the coming months!
Back to Top

There are no upcoming events at this time.